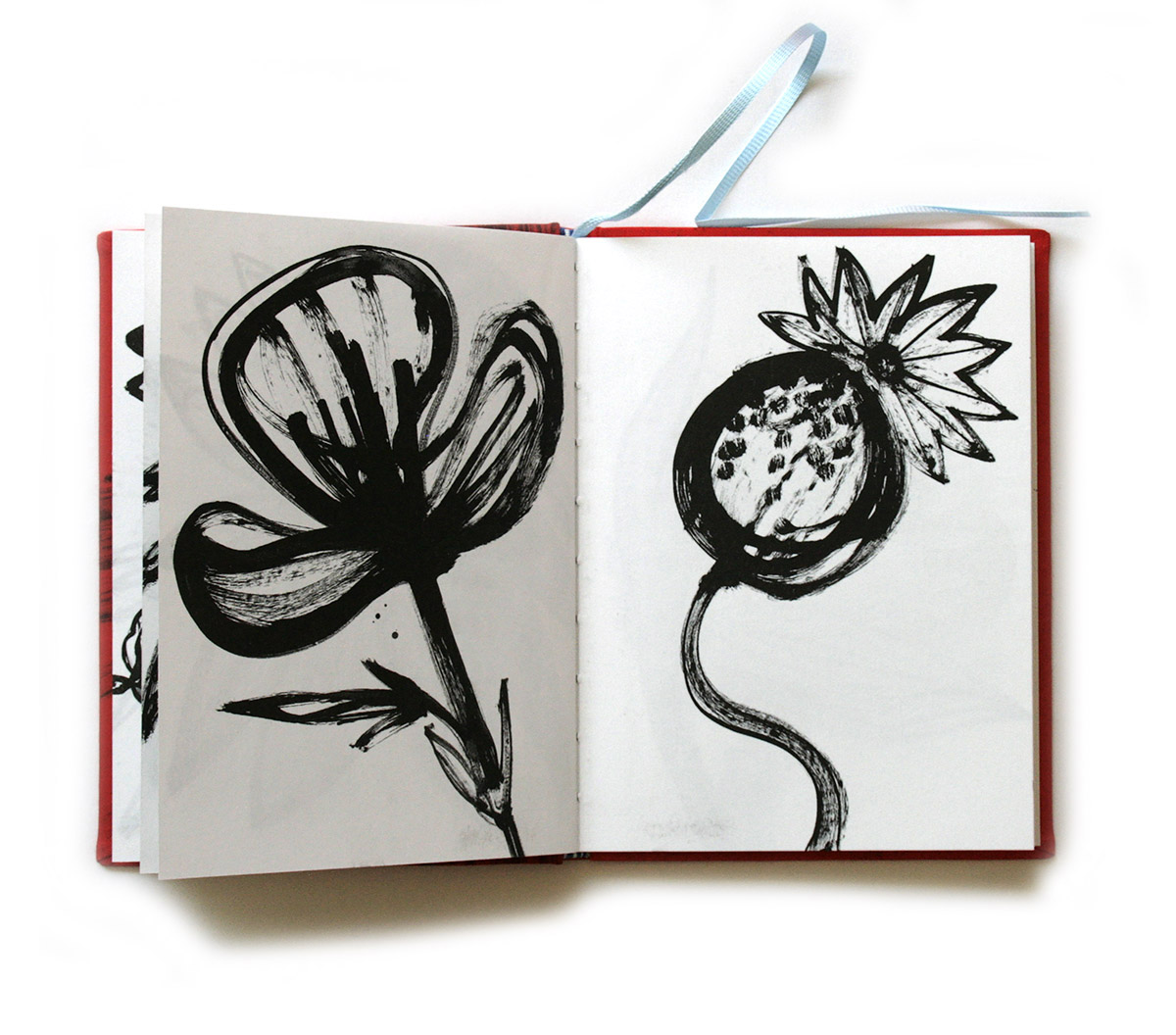 Exercise: Take a walk until you come to a garden. Go into the garden. Choose the flower that, on that day, appeals to you most clearly. Pick the flower, and carefully carry it home. Contemplate the flower. Put it away. Draw the flower in one concentrated movement. Repeat this exercise regularly.
This paragraph could have been taken from Yoko Ono’s little yellow book “Grapefruit” , which consists of small exercises and rituals to make us see and sense the world as if it were new -- which, all things considered, it is every single day -- and to accept the world as though it were our last chance to do so, which, all things considered, it always can be.  But the little exercise above was not written down in that way, not formalized. Some exercises only take on a clear shape when you have put them behind you. Nevertheless, it was a practice in which painter Maria Dubin engaged over the course of a year. Throughout the entirety of 2016, she regularly went from her home at the time in Hjortekær to the garden at Rungstedlund. Each time, she selected a flower. Only one. She wasn’t trying to find the garden’s most beautiful bloom or to gather a representative array of all the florae. To the contrary, she chose the flower that, on that particular day, “spoke” to her, a flower with which she felt some form of connection or, as she herself put it, “the one that tickled my fancy that day.” It might be a scarlet poppy just blossoming, a slightly curled dock leaf, or it might be a greyish seed head. By the very nature of things, the selection varied as the year went by.

Maria Dubin brought home the day’s flower, she studied it, the way it blossomed, and she drew it with India ink and a hard, dry brush. She uses a lightfast black ink, which contains many nuances, something she discovered after a long search. She can dip her brush quite lightly, so the colour becomes almost greyish, or she can lay it on in a thick, shiny layer that rests on the surface of the paper.

As Maria Dubin draws the flower, she does not look at it. She has already absorbed it, and it is no longer a specific flower. The transformation has already started; the flower in the drawing is different. For Maria Dubin, drawing is a discharge of energy. The drawing must be realized in one movement, one total transformation of inner energy into a visual expression on paper. You cannot go back and forth with this sort of drawing, nor can you correct it. If it does not work the first time, you have to start over. This method is reminiscent of Asia’s tradition for calligraphy, which is an art form in itself that requires an extremely concentrated presence.

Maria Dubin did not come to the garden every day, but she came so often that she wound up with 100 drawings of 100 plants of which 50 have been selected for this book.  There may be several drawings of the same type but no two drawings of the same flower. Each drawing is a reproduction of a unique plant. When you consider Maria’s flowers, it is striking that it is not the flower’s affiliation to species or family that has interested Maria Dubin. It is not a matter of how many stamens the flower has or points on its petals. She is not concerned with categories or boxes but, rather, with capturing the individual flower’s distinctive character, to create an individual portrait seen through a temperament.

In many ways, Karen Blixen’s relationship with flowers was unconventional. She mixed high and low, so to speak, in her flower arrangements - weeds as well as ornamental blooms. She did not create bouquets by the book but put them together the way a painter works with form and colour. Arranging flowers in a vase or a tureen, which she often used, was not something she just did one, two, three. It had to do with creating an idiosyncratic composition that reflected precisely the guests who were coming. And this could take time. She looked at colour, at volume, form, density. It is said that she might ride her bike to visit friends’ gardens if she was in need of a special yellow colour she lacked in her own. This anecdote might sound a bit posh, eccentric, like someone who had nothing better to do. But, perhaps, in reality, it speaks to how we give life meaning by insisting that it is there all the time. “It is the time you have spent on your rose that makes it so important” – as the fox puts it in the lesson he gives the Little Prince.

I am quite sure that nature, whether it was Danish or African, was where Karen Blixen felt at home. Nature had been there before words from when she was quite small. For which she also quoted the English poet Landor: “Nature I loved, and, next to Nature, Art”. Her father taught her to commune with nature, to distinguish bird calls and their migratory routes: ”a whole world opens up for you when you hear about migratory birds, the huge net that is spun around the earth in accordance with some calling inexplicable to us in which life is nestled”. It was essential for her that, in posterity, Rungstedlund Park should be a refuge for birds. Karen Blixen did not want to preserve nature for itself. To the contrary, she wanted her garden to be open to other people. Her position was that those who enjoyed plenty had a duty to allow others into the splendour. And it was in that spirit, for example, that she removed the hawthorn hedge, so people could see into the park from Strandvejen. In this respect, there is no doubt but that Karen Blixen would have approved that Maria Dubin, as she herself put it, “borrowed Karen Blixen’s garden”.

Flowers are for the moment. You pick them, put them in a vase, and the experience has already begun to be over. Some blossoms are more enduring than others: The poor poppy does not even make it across the threshold before it sheds its first red coattails. Karen Blixen supposedly created an arrangement for a special occasion that contained, among other things, withered dandelions with their spherical seed heads and linden branches with the leaves plucked off, so only the dainty flowers were left (for Blixen, a bouquet was not supposed to be nature but art). It was a bouquet that would fall apart with a puff of wind, intended to be fragile and created for the moment.

Maria Dubin’s flowers are not pure and refined, but they, too, are captured in the moment. They are distinctive personalities. They gladly fill out the entire surface, stretch from top to bottom, move to the edges, demand their space, centre themselves on the surface like powerful suns from which energy emanates. There is a body and a force to them; one might call them the flowers of a mature artist. They are not concerned with striking an attitude; they rest within themselves to that extent, self-conscious, erotically forthright, regardless of whether they are about to burst open with unexpended young energy or whether they are captured the second before they discharge their seeds. A seed head is positioned right in the middle of the picture, potent to the last. Swollen, succulent petals look as though they are about to burst from the poppy’s bud. It is the moment before it unfolds itself. Another seed pod looks as though it is vibrating, as if it is the moment before it takes off. A stem has tiny, bristling hairs, and this physical sense plants itself in the observer. As much energy as Maria Dubin puts into creating these plants, so much energy do they seem to give back to the observer.

Maria Dubin is a sensual artist. She works with a conscious form of naiveté in a faith that providing people with beauty also makes the world better. She is aware that naiveté is important. That it is just as valid to insist on the naive (the world ’naïve’ comes from the Latin ‘nativus’, original, inborn) view of the world as the rational view. The word dignity recurs in her stories. You have to work with dignity just as people must be granted dignity.

Maria Dubin’s working method falls along two paths. One is extroverted. Here, she is extremely present for other people and concerned with how she qua her artistic work can make a difference locally. The other path is diametrically the opposite, inward and almost meditative.

With the first path, she works out in society. As she did in 2016, when together with an international group of artist friends whose tickets she collected money for, she decorated Kongelunden Asylum Centre. She engages with the people around her, their lives leave traces in her pictures. This also happened when, in 2012, she moved her studio for a week into Hospice Djursland. Her idea was that, over the course of the week, she would paint objects with which the residents of the hospice had a special relationship. While she painted the object, the resident’s story was written down. The result can now be seen at Hospice Djursland as paintings of a dog, a cane, cigars and Chablis and several family portraits. It is in the encounter with human beings that the energy for these major projects arises. So, too, with the major mural of Rambøll’s domicile at Olof Palmes Allé in Aarhus. Here, the starting point was to paint flowers, without preliminary sketches, directly onto the wall. Here, too, the staff could bring their own flowers to which Maria Dubin would relate and, perhaps, be inspired by.  A large part of these extroverted works, however, cannot be seen. This part of the work is immaterial and consists of all the encounters, thoughts, feelings and exchanges such a project, regardless of where it plays out, sets in motion. The artist is a catalyser and a facilitator. She is everyone’s guarantor that it all goes in the best possible way and that the ethical proprieties are observed. It requires great self-confidence and steady nerves to be responsible for something that, down deep, will always be uncontrollable, unpredictable, as human encounters are.

Somewhere, Karen Blixen’s secretary writes that Karen Blixen liked to touch and fiddle with things: “Karen Blixen touched things in a way that had something of a caress to it.” Maria Dubin’s work in Karen Blixen’s garden is a part of her second form of practice, the introverted. Here, she disappears from the world in a more meditative process, based on repetition. For her, it is a way of recharging. Maria’s flowers are the vestige of this work, a loving and concentrated exchange between garden, flowers and paper.