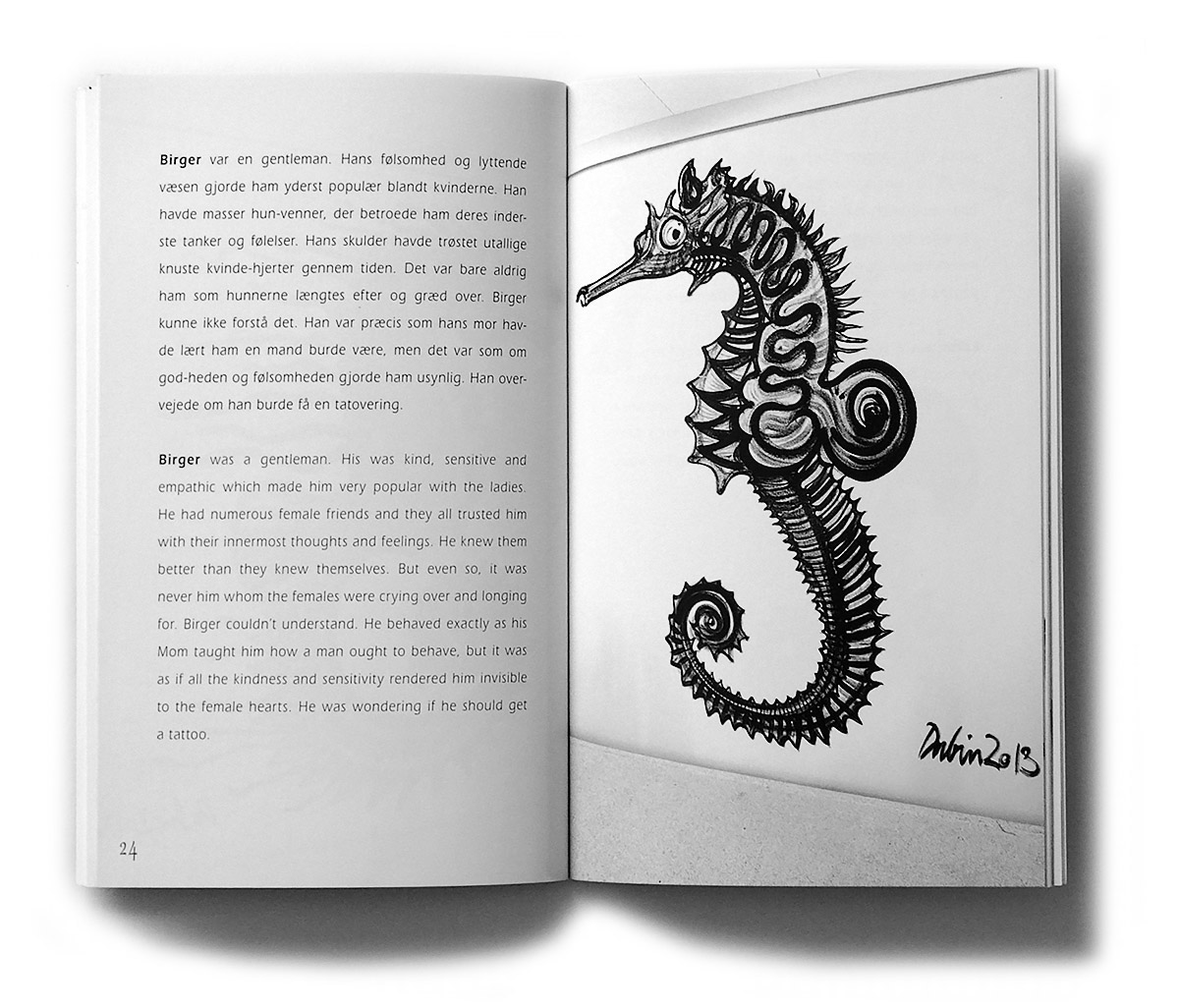 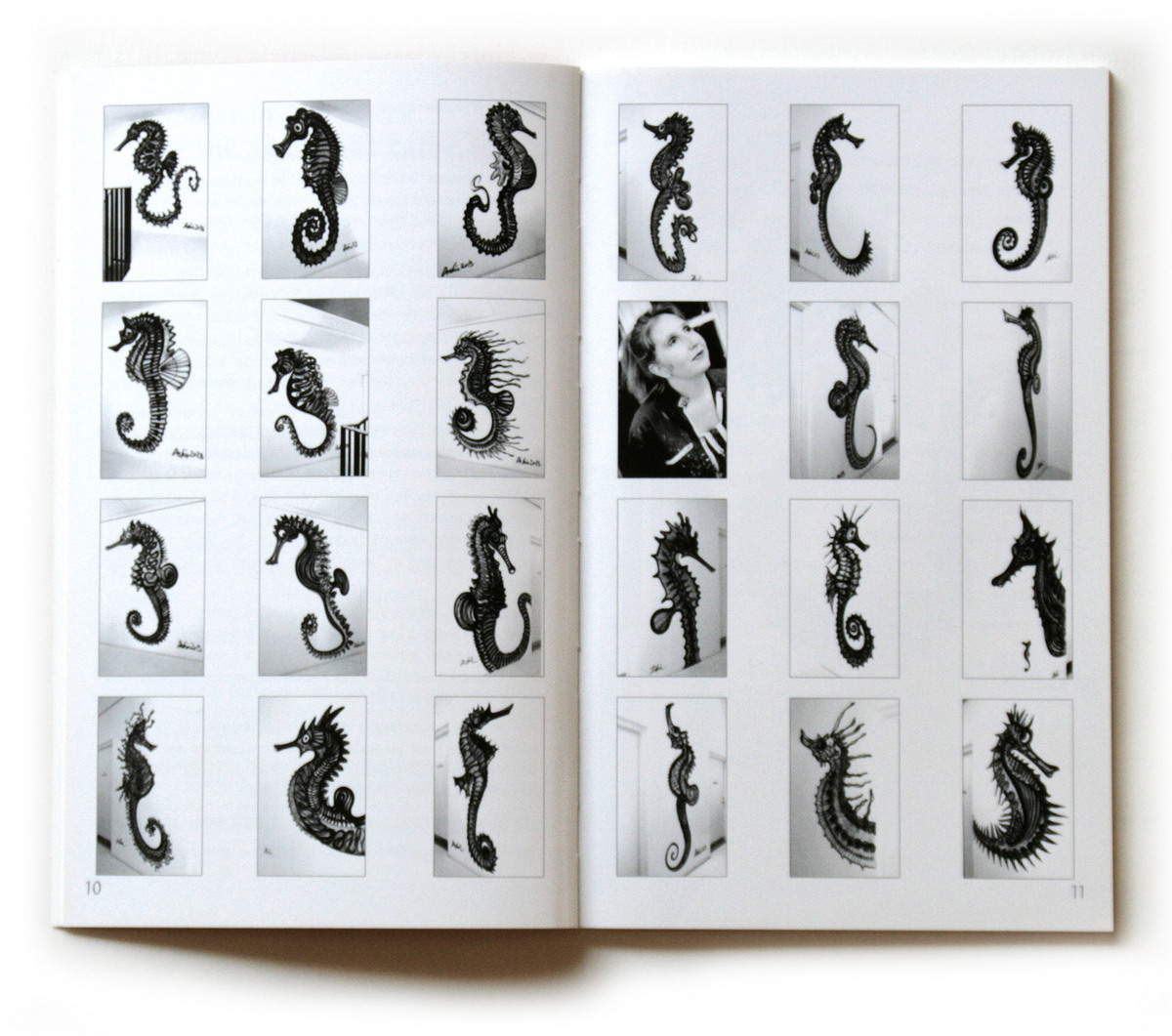 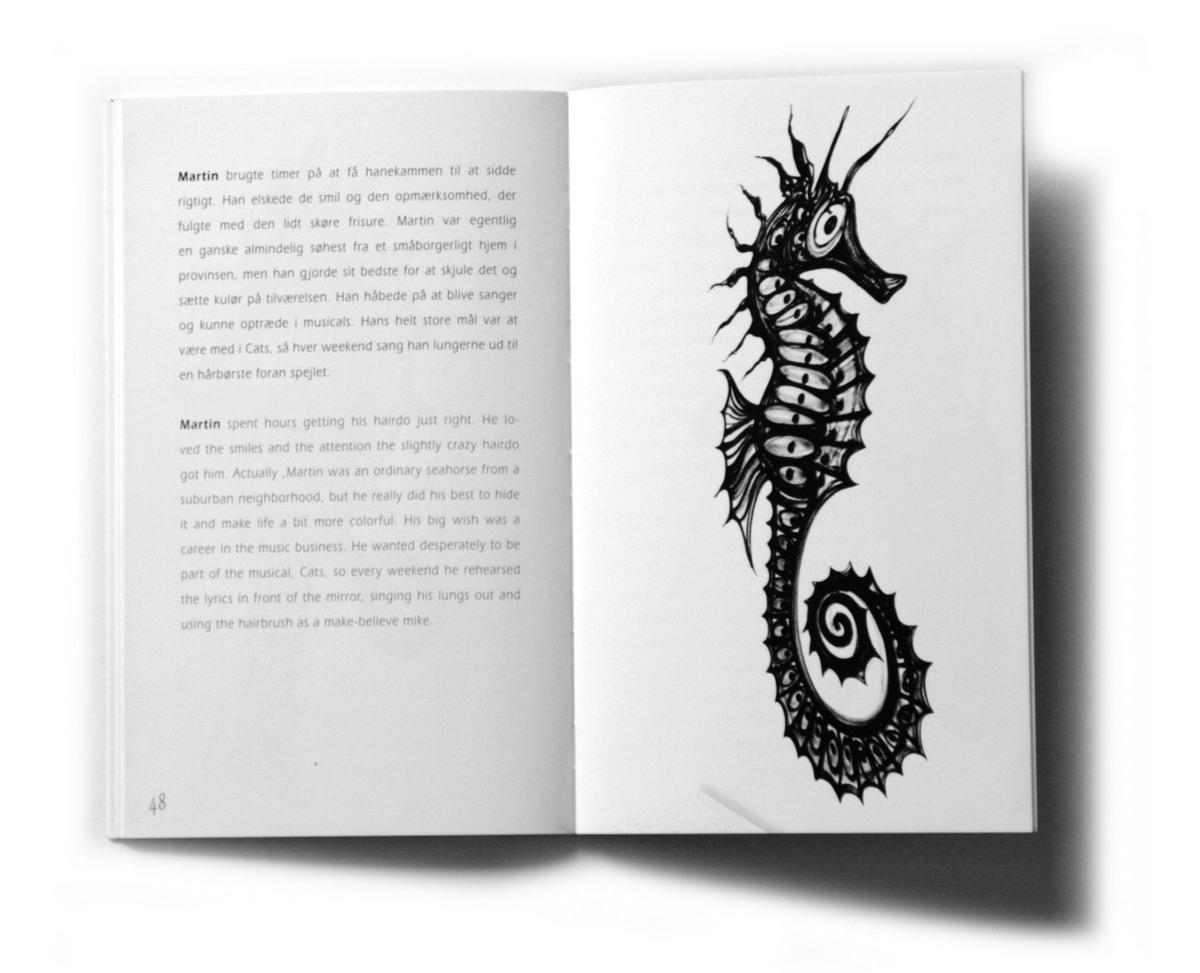 - How the Seahorses came to Søfryd

For as long as I can remember, l've been fascinated by seahorses. ·
I grew up in California, and every summer we visited my Danish grandpa­rents in Hellerup. The highlight of the summer was always a visit to "Den­mark's Aquarium", especially since I could choose a seahorse and bring it home with me.
That was before seahorses became known as endangered species. Unfor­tunately, quite a few Chinese believe that if you eat dried seahorses it will, among other glories, enrich your love life.
Seahorses mate for life- they are monogamous. The female chooses the male with the !argest belly, and the best dance moves. She places him on a reed, and gallivants out into the sea. But she makes sure to visit him each morning, do their dance together, and mate, if He is not already pregnant.
The male seahorse spends most his adult life pregnant, gives birth to the tiny fully developed seahorses, hangs on to his reed and awaits Her - and then becomes pregnant again. Maybe he has practiced a new dance-move or two, to impress her and to make sure she doesn't loose interest in him.
My dried seahorses are part of my ever-growing cabinet of curiosities. They have travelied with me to all the countries where I have lived, and have, through the years, been models for innumerable drawings, paintings, and ceramic works.
In the spring of 2012, I set up my studio in the Djursland Hospice. Here I in­vited the residents to bring an object of special importance to them, which I would paint for them.
While I was awaiting the first resident, I drew my seahorses again. I only got to make two drawings, before the first resident came with a treasure and a story. It became an intense week full of tenderness, joy, tears, many stories, and paintings. It is a week I cherish and shall never forget. Later, I donated the seahorse drawings to the Danish foundation against Cancer, and they were put on auction to raise funds.
My old seahorse love was again triggered, and I decided to paint new works each day for a month, and post photos of them in the early morning hours on facebook. Within minutes they had found new homes, all over the United States and Europe, Mexico, Africa, and yes, even in China. The seahorse fever spread, those who had caught one, wanted more, and one month became two.
The South Africa based zoologist, Camilla Nørgaard, who acquired 6 sea­horses, created a club on facebook for all the new international seahorse owners: "Executive Seahorse Club of 2012". At the present moment it has 250 members, sharing photos of each other's horses, which frames they have chosen, how their surroundings look, and sharing the latest seahorse stories. Or, as one of the members said recently, "t's like an on-line"Build-a ­bear" store for grown ups"
Ballerup's Property Company asked me to take a look at their new residen­tial buildings known as Søfryd, and to suggest artwork for all the hallways. Right away, I could imagine the seahorses becoming alive here, and finding another new home. They are painted with black ink directly on the walls, and are larger than life (humanize life). The walls opposite each horse are in bright and shiny red, orange and yellow.  This brings dynamics to the architecture, glow and warmth to the hallways, and fairy-tales to the residents.
As soon as each seahorse was completed in Søfryd, I posted a photo of him or her in the Seahorse Club. Another aficionado of seahorses, Stine Ringvig Marsal, also a club member and proud owner of 5 seahorses, spontane­ously wrote the most wonderful fairytales about them. Her enchanting tales are all gathered here in this book.
And the seahorses continue to dazzle, multiply, and travel in The Interna­tional Seahorse Hunt, private homes, apartment buildings, and now in a whole new mixed-use project in southern Serbia, soon under construction (NoviNis) -Nis ,the first Seahorse City in the world.
Stay tuned on their doings and follow them in the Seahorse Club ....
Maria Dubin, Spring 2013