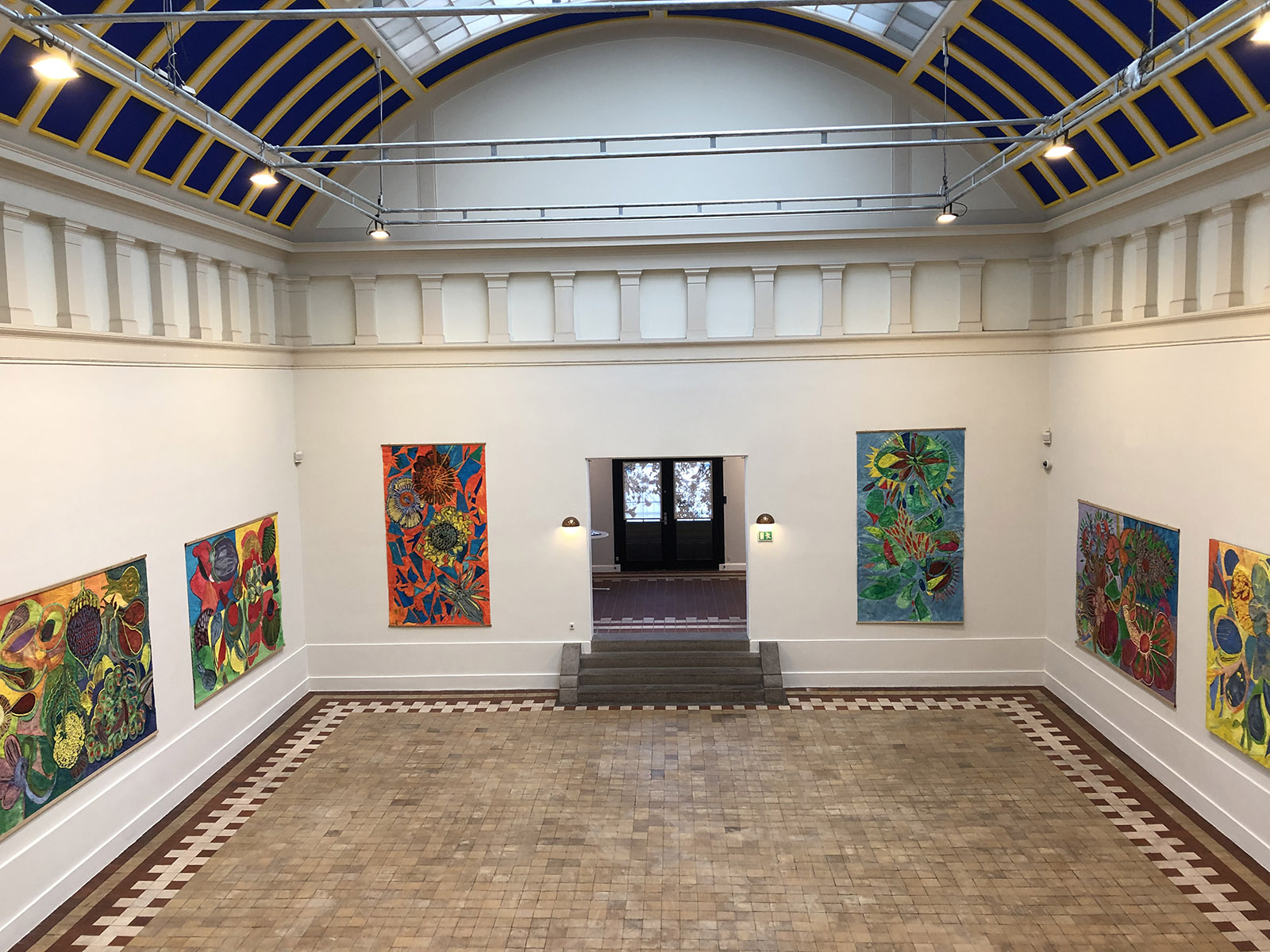 A Colourful Message from the Black Flower

“Exercise: Take a walk until you come across a garden. Go in and choose the flower that most appeals to you. Pick it and carry it home, carefully. Look at it closely before putting it away. Then draw the flower in one concentrated movement. Repeat this exercise regularly.”

These are the opening lines of “Maria’s Flowers”, Mai Misfeldt’s excellent introduction to “Karen Blixen’s Flowers”, published in 2017. In this quotation there are clear references to Yoko Ono’s methods, and this short exercise symbolises the process which the artist Maria Dubin has followed in her flower theme. A meditative, introverted, and discreet process, hardly noticeable, in which each flower is picked and studied before being transformed with a disciplined, yet warm, black Indian ink pen, into a simple, stringent expression of the flower’s essential being.

From this opening statement in Maria Dubin’s four books of “Karen Blixen’s Flowers” in Danish, English, German, and French, whose colourful covers contrast with their black and white contents, her flower theme has since undergone a transformation into an explosion of form and colour.

Now we meet the extroverted side to Maria Dubin’s work. An all-embracing and energetic expressiveness, in which she also excels. Now she is working her way into the flower’s essential being through the generous use of a palette of colours, which reminds one of a luxuriant mid-Summer garden. There is no holding back, but instead a generous abundance of light, colour, joy, and nature.

The Black Flower is suddenly transformed into part of a gigantic nature picture, which almost seems to burst through the frame: can the flowers stay inside? Everything is on its way out, expanding and growing within us, out into the world. Just as Maria Dubin’s impressive artistic expression also fills the room, has its own sound, and draws us in. Her choice of medium is elegant and light: paper, crayon, water colour, pencil and tempera.

It began with a personal journal, a discreet exercise to be repeated regularly. The flower had to be experienced with the senses. It became a black Haiku poem, in which the flower’s intrinsic nature was captured in one concentrated movement. From the Haiku poem a story developed – as with Karen Blixen – a story of generosity, life’s journey, and threads of destiny. The flower leads us to many different places and captures us at the moment it is picked from the garden. At the very same moment when it is at its most enchanting and beguiling.

A significant collection of Maria Dubin’s Black Flower pictures are on show at the Marburg University Hospital, Frankfurt am Main, Germany, and the accompanying yellow book in German “Karen Blixen’s Flowers”, is part of the exhibition. At the moment it can be seen in the hospital’s pharmacy: a soothing and positive experience in amongst the medicines.
A year ago the Black Flowers were shown at a literary gallery in Tunis. From Tunis to Germany, and now to Odense, Denmark, in colour. To explore the world of flowers with Maria Dubin as guide is to go far beyond the narrow confines of their usual representation. It is like re-discovering the world, reaching out and saying “yes”.
Yes indeed, and thank you!